I first painted with newly purchased Alvaro Castagnet brushes after discovering his style and art. I was awestruck by his use of light and color, which was masterful, and his tools, a joy to see how he used them.

As a watercolor artist myself I would forensically examine his artwork, rewatch his DVDs over and over; test the famous red Alavaro Castagnet brushes, all to figure out how he painted such amazing art.

Who is Alvaro Castagnet?

Alvaro Castagnet was born on Halloween in Montevideo, the capital and largest city of Uruguay. His father introduced him at a young age to watercolor artist and Professor Esteban Garino, who inspired Alvaro to paint in watercolors. He would then go on to learn his artistic craft at the National School of Art in Montevideo.

Having fallen in love with art Alvaro began working in a studio doing odd jobs.

He would then migrate to Australia in 1983 and live there for 20 years, before returning to his native Uruguay. In that time he has been holding solo exhibitions and touring the world teaching at art workshops.

He would also establish the famous painting group, Winterlude, with other notable watercolor artists: Joseph Zbukvic, Hernan Pekel, Patrick Carroll, and Nick Canosa. They would travel the world painting plein air together.

What really sets Alvaro apart from other watercolor artists is his commitment to teaching his skills and techniques. I always believe that there comes a point where you have learnt and grown so much the next step to allow yourself to continue to develop as an artist is to teach.

Only then can you learn new dimensions to your art by looking through the eyes of your student. Seeing art with new eyes opens you up to new possibilities. It’s almost like when you come back to a painting after sleeping the night.

Alvaro has numerous tutorials, has written books and regularly lectures at events all over the world.

Alvaro has been awarded dozens of awards during his 30 years as a professional artist, including a Plein Air Magazine Lifetime Achievement award at the 7th Annual Plein Air convention & Expo. He has also won the American Watercolor Society’s coveted Dolphin Fellowship.

The first thing that hits my senses when I see a piece of art by Alvaro is the light and color. Alvaro only paints what is essential, once you can understand what he is showing you, that is all he needs to paint. Not getting bogged down in superficial details.

Alvaro is a master of using economy of brush strokes, but still painting enough to convey a feeling of what he is painting; sometimes he lets your mind complete the painting.

In this painting of Venice you can see in the areas circled in white the lost edges, we the viewer understand that there is a building there, but we use our brain to fill in the forms.

The lost edges help focus the viewer to the focal point which is the building central dome, Alvaro accentuates these lost edges with use of values to control contrast, which again helps to lead the eye.

It’s a really efficient and complete mastery over the medium.

Alvaro uses light and shadow to shape and frame his paintings. Connecting shadows to give a sense of integrity and harmony. Seeing his art in black and white (in Photoshop) you can discern how he employs values in all the ranges.

Connected to shadows is Alvaro’s use of edges, edges are lost and found. The contrast of edges helps to define shapes and blur what’s not a focal point.

While Alvaro is a master of color, he paints thinking, not about hue, but about warm and cool. He will vary the hues in the shadows, so as to not make flat colors.

There is such mastery and control over color and light I have not seen from anyone else.

I’ve been learning from many greats, chief among them, Alvaro. I have collected together as much information on the tools and resources available. Putting together my own collection, including select Alvaro Castagnet brushes.

Alvaro is famous for the color red, which is synonymous with his brand. And of course when he debuted his own specially designed signature Alvaro Castagnet brushes, they would have to be designed in brilliant red.

Alvaro Castagnet brushes are designed to have a longer handle. Alvaro likes to paint holding the end of the brush and because it’s much longer than regular handles it makes his brush strokes that much looser, which is his style.

You should take this into account if you already have a favorite storage case or box for your brushes.

The Neef 117 Wire Bound Squirrel Mop Brush comes in 10 sizes ranging all the way to number 10.

For painting straight lines like telephone wires or lamp posts, Alvaro employs his Neef Rigger Brush, which he affectionately calls the Needle.

This is a great brush, and I use it whenever I need a straight line. For digital artists it’s similar to lazy load when making a stroke in Photoshop.

These special Alvaro Castagnet brushes are in my collection, and highly recommended. They are quite expensive, but the quality you get matches the price. Although these days I have found quality alternatives, none match the same characteristics of these long tailed mop brushes.

Alternatively he has a signature Alvaro Castagnet brushes set made by Escoda. They are three long pointed rounds, in sizes #8, #10 and #12. I have not tried these brushes so I cannot in all honesty comment on how good they are. But Escoda are a fantastic brand.

Alvaro Castagnet brushes are always paired with beautiful paints which are, I believe, almost exclusively Daniel Smith watercolors. Daniel Smith paints are well known for their color brilliancy. Their reds and oranges are possibly the most vivid colors I have used.

I’ve noted that Alvaro has limited his palette these days going from painting with 16 colors to 12 colors. But as with all artists this is something that is ever changing depending on the situation.

Daniel Smith have a set collection of paints from Alvaro which are available:

I’ve seen Alvaro use a different set of colors when he is seen painting in a studio set up.

In his most recent DVD which I highly recommend, The Passionate Painter in Havana Parts 1 and 2, Alvaro employs a 12 color palette. From what I can tell, this is his palette:

I am only unsure about which green blue he used, but I am almost certain it’s Viridium.

I’ve also noted Alvaro would use, in his older work, Holbein Lavender to grey his washes. Although this is now available from Daniel Smith, I have not seen him use this in his palette recently.

One last paint Alvaro uses, but does not put on his palette, is Daniel Smith Chinese White. Alvaro uses this straight from the tube to paint his highlights or if he paints smoke.

However his recent Vimeo tutorial showed him using Holbein Jaune Brilliant, instead of chinese white.

It seems that nearly all professional painters today choose between two famous brands, Arches and Saunders. Alvaro has said he uses these two brands however I have only been able to identify him using Arches.

The cold pressed paper is rough so it gives that added texture that gives character to Alvaro’s painting style.

Like his signature Alvaro Castagnet brushes collection, Alvaro has a signature paintbox made by an english paintbox maker, The Watercolor Paint Box Company, created by Craig Young.

Craig has been making paint boxes for 20 years. All the boxes are handmade, with waiting lists at over a year.

All Craig’s paint boxes are made from brass. They are then enamelled matt white on the mixing surfaces and gloss white on the  other internal surfaces. All come with external glosses available in Dark Green, Cobalt Blue, Burgundy Red or Traditional Black.

Alvaro has the traditional paintbox based on old robertson’s box used by professionals including John Yardley, who wanted a compact box with deep mixing wells.

Craig’s paint box has two side flaps that open up as mixing surfaces and double wells in the lid and flap double mixing wells for larger mixes.

As an owner of one of these I can testify to their craftsmanship and sturdy design. These will last a lifetime, except maybe the paintwork. But at a hefty £325 it is a significant investment.

I would suggest getting a plastic version which is more than capable of doing just as good a job for the travelling watercolor artist.

Alvaro has written and published 4 books, some which have been translated into four languages:

Unfortunately these are currently out of print but can be bought second hand. When they have a reprinting be sure to check back to get the links.

Perhaps some of his best resources are his DVDs, which are filled with incredible technique and craft. Of course you get to see Alvaro’s genial character come alive which only adds to the artist’s appeal.

I’ll list these in order of my favorite DVD:

If you have any more links for Alvaro Castagnet that you think would be useful for other artists looking to learn from this great watercolor master, comment down below.

It’s my intention to make this into a series. I have always looked to other great artists for inspiration and learning, and believe we can glean much from their techniques, tools and philosophies.

If you have any artists you wish me to include in this series, again let me know in the comments. 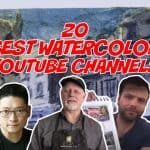 Welcome to my ultimate beginner watercolor supplies guide. I’m going to show you everything you need to know to get you started in watercolors. Check back as I will regularly update this article! My name’s Justin, and while I am a working photographer, I have been an artist all my life and I would consider…

We use cookies on our website to give you the most relevant experience by remembering your preferences and repeat visits. By clicking “Accept All”, you consent to the use of ALL the cookies. However, you may visit "Cookie Settings" to provide a controlled consent.
Cookie SettingsAccept All
Manage consent

This website uses cookies to improve your experience while you navigate through the website. Out of these, the cookies that are categorized as necessary are stored on your browser as they are essential for the working of basic functionalities of the website. We also use third-party cookies that help us analyze and understand how you use this website. These cookies will be stored in your browser only with your consent. You also have the option to opt-out of these cookies. But opting out of some of these cookies may affect your browsing experience.
Necessary Always Enabled
Necessary cookies are absolutely essential for the website to function properly. These cookies ensure basic functionalities and security features of the website, anonymously.
Functional
Functional cookies help to perform certain functionalities like sharing the content of the website on social media platforms, collect feedbacks, and other third-party features.
Performance
Performance cookies are used to understand and analyze the key performance indexes of the website which helps in delivering a better user experience for the visitors.
Analytics
Analytical cookies are used to understand how visitors interact with the website. These cookies help provide information on metrics the number of visitors, bounce rate, traffic source, etc.
Advertisement
Advertisement cookies are used to provide visitors with relevant ads and marketing campaigns. These cookies track visitors across websites and collect information to provide customized ads.
Others
Other uncategorized cookies are those that are being analyzed and have not been classified into a category as yet.
SAVE & ACCEPT